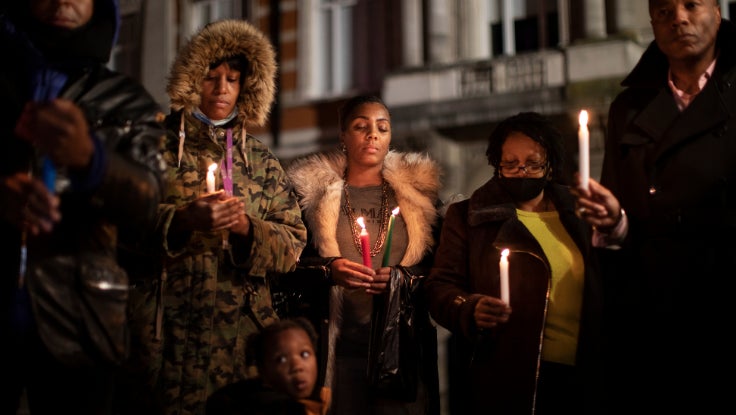 On October 14, 2020, a group gathered in London, England’s Brixton neighborhood to honor George Floyd with a candlelight vigil. October 14 marks what would have been Floyd’s 47th birthday had he not been murdered by police back in May. Since then, folks around the world have gathered in unprecedented numbers not just to honor Floyd’s memory, but also to show their support for anti-racism and for dismantling the police and standing against police brutality.

Despite the incredible support today, the Black Lives Matter movement, a decentralized political and social movement founded by Alicia Garza, Patrisse Cullors and Opal Tometi to "[advocate] for non-violent civil disobedience in protest against incidents of police brutality and all racially motivated violence against Black people," has its origins in 2013. The murder of 17-year-old Trayvon Martin was the spark that ignited the Black Lives Matter movement, and, just a year later, the movement was brought to further national attention when 18-year-old Michael Brown was murdered by a police officer in Ferguson, Missouri.

While support for the movement has grown since then, the sheer number of protestors — and reach of the movement — climbed to new heights this year in the wake of George Floyd’s murder by Minneapolis, Minnesota-based police officers on May 25, 2020. According to The New York Times, the need to seek justice for Black folks, like George Floyd and Breonna Taylor, led "half a million people [to turn] out in nearly 550 places across the United States." And that was on just one day — one day in a movement that has inspired protestors to keep showing up for the last several months.

What’s Contributing to the Sustained Support of the Movement?

For comparison, the 2017 Women’s March recorded between 3 and 5 million protestors on a single day. In speaking to the Times, Deva Woodly, an associate professor of politics at the New School in New York, noted that even the civil rights marches of the 1960s never swelled to such numbers, saying, "If we added up all those protests during that period, we’re talking about hundreds of thousands of people, but not millions." 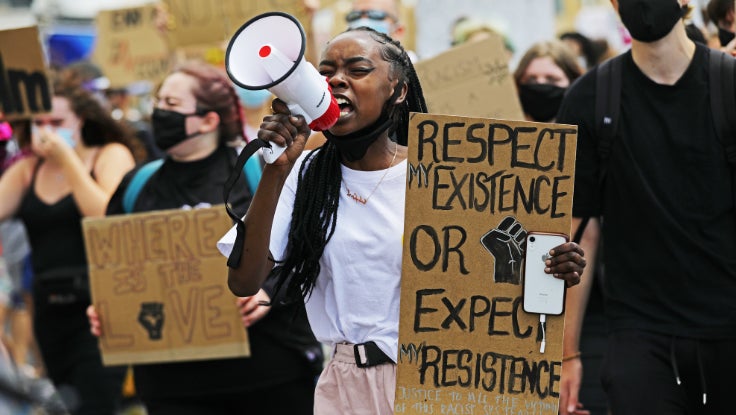 In fact, according to researcher Erica Chenoweth and the Crowd Sourcing Consortium, "15 million to 26 million people in the United States" alone have participated in protests since the deaths of George Floyd and Breonna Taylor, leading many to call the Black Lives Matter movement quite possibly the "largest movement in U.S. history." For many folks, marching in a Black Lives Matter (BLM) protest marks their first foray into social justice. Writing for The Washington Post, Maneesh Arora found that "almost 4 out of 5 of these respondents reported that the recent protests were the first BLM protests they had ever attended."

In an interview with Wired, Blackbird organizer Maurice Mitchell noted that Black Lives Matter is "decentralized but coordinated" — a key that’s essential to the movement’s global success. No historical social movement is a monolith; even though support for the Black Lives Matter movement has cropped up across the country — and across the globe — the organization isn’t directly involved in each protest instance. Instead, it provides organizers and activists with a framework, from tips and resources to signage. That framework, combined with the fact that social media makes live, raw information and narratives more accessible (and, sometimes, visceral), has been a crucial development in getting both fledgling and long-standing activists alike to rally around the fight for justice.

First-Time Protestors, Pro Athletes With Platforms and a Pandemic

Without a doubt, the ongoing COVID-19 pandemic — and the U.S. government’s response to it — has dictated quite a bit about how folks feel this year. For many, there are frustrations surrounding the public health crisis, the staggering unemployment numbers, the unprecedented closures of small businesses and, of course, the fact that the novel coronavirus disproportionately impacts Black Americans. While the very real fear of contracting the novel coronavirus has led many to support the Black Lives Matter protests from home, the uncertainty caused by the pandemic, paired with the desire to see social and racial justice, has spurred many to take to the streets too. 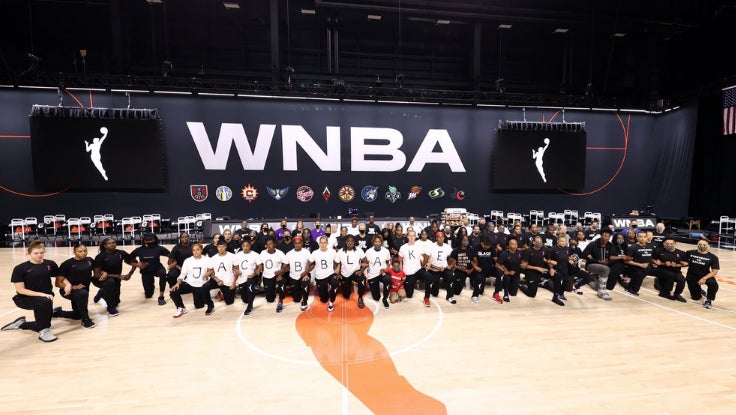 This same desire to take a stand has also driven folks with larger platforms to show solidarity with the Black Lives Matter movement. When professional sports slowly started to return over the summer, Nneka Ogwumike, forward for the Los Angeles Sparks and president of the Women's National Basketball Players Association (WNBPA), told The New York Times that the season could act as a platform for spotlighting activism, saying, "We’ve always been the first in line to speak about social issues, and we see this as a really magical moment for us to turn the unexpected into something that could be very beautiful, with 144 voices in the same place."

Without a doubt, the Women’s National Basketball Association (WNBA) helped lead the conversation, with whole teams walking off the court during the national anthem and players wearing Breonna Taylor’s name on their jerseys all season long. But the WNBA players weren’t the only ones using their privilege and platform to bring visibility to the movement: Whole National Women’s Soccer League (NWSL) teams wore black and knelt during the national anthem, National Basketball Association (NBA) players made a powerful unified statement by striking and tennis champ Naomi Osaka lent her voice to the movement before and during the U.S. Open.

Osaka (@naomiosaka) perhaps said it best when she tweeted, "[B]efore I am an athlete, I am a Black woman… I feel as though there are much more important matters at hand that need immediate attention, rather than watching me play tennis." While celebrating athletes’ solidarity shouldn’t overshadow the movement itself, it seems clear that the wide reach of the Black Lives Matter movement, and its massive, visible support, has helped to sustain protests even months after the police murdered Breonna Taylor and George Floyd.

From near-constant protests in Minneapolis, which sparked another movement to defund the police and invest in community-led resources, to the Compton Cowboys riding in protests on horseback, folks across the country have shown solidarity. Even more astounding, perhaps, is the global reach of the BLM movement, with protests swelling in cities like Rotterdam, Tokyo, Paris, Berlin, Sydney and Bogota — just to name a few. Still need some perspective on just how enormous this movement is? Check out this map, which has recorded a staggering 4,444 cities or towns with protests since May (last updated October 5, 2020). 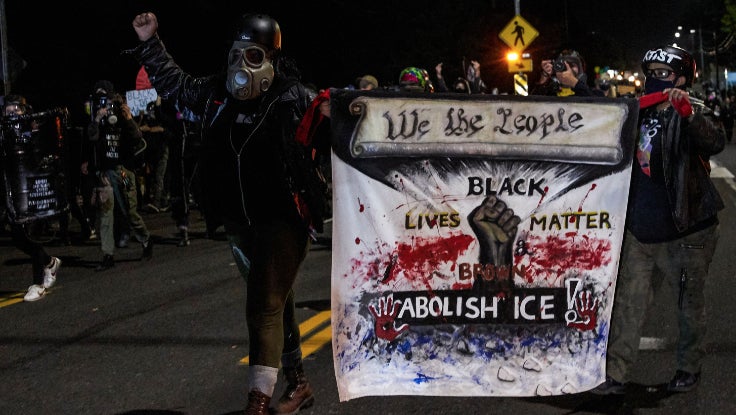 In the U.S., one of the cities making headlines quite consistently is Portland, Oregon, where protestors have been met with police violence and blanket arrests. Pictured above, demonstrators gathered on September 5, 2020, marking the 100th day and night of protests against racism and police brutality; police arrested dozens of folks and used tear gas liberally — all while wearing riot gear. With the presidential election looming, the Trump administration has sent federal agents into cities like Portland, inciting even more violence against protestors. But in the face of that violence — and in the face of waning media coverage — the Portland protestors, and so many others, have persisted as they near an incredible 150 days of action.

Need More Cult Coverage After "The Vow"? Try These Docs and Podcasts

Nostalgic for the Flip Phones of the Aughts? You'll Flip for the Newest Styles
3

How to Make Festive DIY Holiday Wreaths This Winter
4

Need More Cult Coverage After "The Vow"? Try These Docs and Podcasts
5