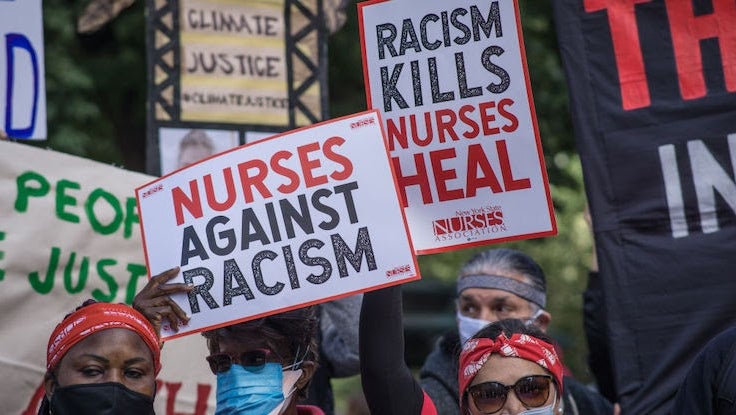 On November 16, 2020, the American Medical Association (AMA) officially designated racism a public health threat. As the country’s largest group of physicians and medical professionals, the AMA aims to promote the "betterment of public health," and it found that racism results in major discrepancies in the quality of care white people and people of color receive. This announcement is a meaningful one in large part because it’s official recognition from a respected leader at the top level of the healthcare industry. And it’s coming from the level where, when changes are made, there’s greater potential for far-reaching, positive shifts that could more thoroughly combat the historic marginalization of people of color and their treatment in the healthcare sphere.

During a year when we’ve had the privilege of witnessing what quickly grew into the largest civil rights movement in American history — a movement that’s seen millions of people come together to demand deep, lasting change and racial justice — many of us have realized the importance of actively working to combat racism in all forms. In doing so, it’s essential that we take the time to learn about the roles society’s biggest institutions play in impacting the lives of people of color.

The AMA is one of these institutions, and its recent announcement could help drive long-overdue change. Yes, it’ll take time to begin implementing and facilitating policies that’ll lead to those changes. But as that process finds its footing, it’s important to gain a deeper understanding of the potential these changes have, along with how the AMA intends to pursue them.

Racism Has Long Been Responsible for Negative Health Outcomes

Why is it such a big step for the AMA to make this statement in the first place? It’s a potentially substantial effort to correct the long-term, historical inequalities that have affected people of color’s access to healthcare and determined the poorer health outcomes they experience as a result of treatment. Discriminatory attitudes in the medical community — along with overarching ideas about how a person’s race could impact their health — continue to negatively influence the care different groups receive. In addition to implicit bias, overtly racist ideas that are deeply ingrained in healthcare as a system put people of color at greater risk for contracting illnesses and subject them to less effective treatments than those white people receive. 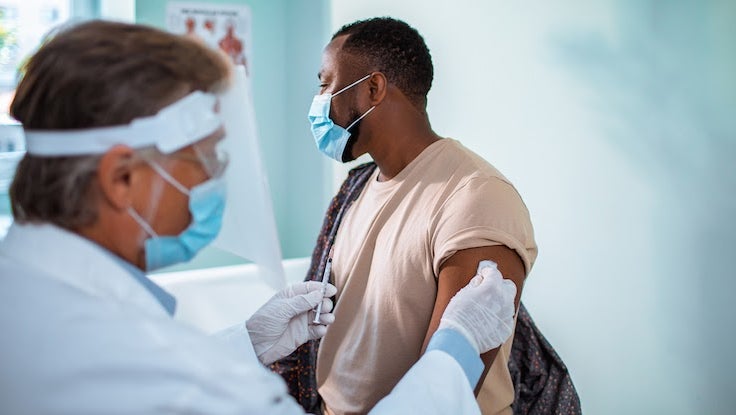 All of this to say, racism can impact a person’s mental and physical health in innumerable ways. Black people have lower life expectancies than white and Latinx people overall, and they’re at much higher risk of developing health conditions like high blood pressure, obesity and Type 2 diabetes. In the United States, Black and Indigenous babies are more likely than white infants to die in their first year of life, and, according to the U.S. National Library of Medicine, pregnant parents in those groups are "three to four times more likely to die from pregnancy-related causes." Additionally, experiencing racism is associated with higher rates of depression, anxiety and other mental health conditions, especially among Asian-American and Latinx populations. And this year, Vox reports that Black Americans are also dying from COVID-19 at twice the rate of white Americans.

These statistics are striking. But they illustrate the pervasiveness of racist ideas that exist in the medical community, thus creating lower quality of life for people of color. Those higher risk levels aren’t due to any biological differences between races — an idea that’s been debunked countless times but still persists. Instead, people of color actually receive different medical treatment that ends up elevating their risk levels.

"It’s a holdover from the days of slavery," said Dr. Jennifer Lincoln, an OB-GYN from Portland, Oregon, referencing a time when doctors perpetuated incorrect beliefs about Black folks’ pain tolerance and other physical attributes to justify the dehumanizing treatment of enslaved people. In fact, a 2016 study found that half of white medical students still think Black people feel less pain than people of other races, which leads to underprescription of necessary pain medications. That these unfounded and racist ideas have persisted this long demonstrates exactly why there’s a need for not only the AMA’s declaration but for real action.

In June of 2020, the AMA made a pledge in response to the growing protests and calls for sweeping social reform that swelled after the May 25 police murder of George Floyd. In this document, the medical organization’s board of trustees committed to take "action to confront systemic racism and police brutality," which it recognized as urgent public health threats. Also included in the pledge was the AMA’s promise to "actively work to dismantle racist and discriminatory policies and practices across all of healthcare" — to intentionally create equitable conditions and opportunities so people of color can benefit from higher-quality medical care than what they’ve been receiving. 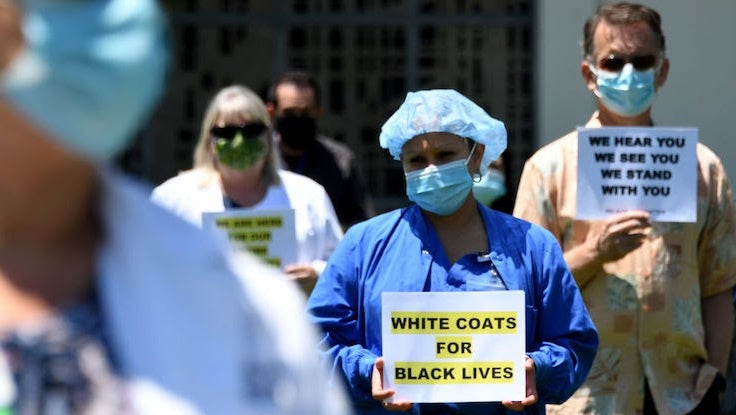 It’s becoming clearer that this pledge wasn’t something performative or a surface-level attempt for the AMA to align itself with a movement just to boost its own reputation. The November statement demonstrates that, due largely to the framework it sets up and the actionable steps it outlines for timely implementation. In addition to recognizing that race is a social construct — meaning it’s a concept created by people, not something based on biological differences that can be medicalized — the statement also provides "a detailed plan to mitigate [racism’s] effects" and "dismantl[e] racist and discriminatory policies across all of healthcare."

So how does the AMA plan to accomplish this, and what steps will it take? The organization proposes action on multiple levels. First, it plans to encourage structural-level change by advocating for government agencies and nonprofit groups to begin funding more research on the extent of the damage racism causes in healthcare. In addition, it’ll push for more thorough research into ways to both repair and prevent those damages. The AMA also plans to encourage educational institutions to develop programs that teach medical students about the causes and effects different types of racism have on various groups — along with ways to prevent racism’s negative health effects and to improve health outcomes for the future.

In addition to using its influence to encourage other entities to take action, the AMA intends to follow a process its House of Delegates — the group’s policy-making body — has outlined to lead by example. Included on this list of steps? The AMA will "identify a set of current best practices" for healthcare institutions, medical offices and hospitals at universities that make it easier for these entities to "recognize, address and mitigate the effects of racism on patients, providers" and other populations. Essentially, the organization will create guidelines that give medical professionals on a variety of levels concrete procedures to follow — a sort of roadmap to direct changes and remove barriers to implementing those changes. Finally, the AMA plans to collaborate with a variety of other medical associations to determine which elements of board examinations and medical education programs teach or reinforce racism so that these elements can be addressed.

Is It Enough to Spark Change?

Of course, the AMA’s new recommendations are preliminary, not sweeping. They’re somewhat broad, and they seem to involve ample "encouraging" of other entities, which admittedly feels a bit amorphous. But it’s important to remember that this is just the beginning of a process that’s going to take time. Systemic racism has been entrenched in American healthcare for centuries, and it’s not going to vanish right away. But the new policies the AMA has presented do have the potential to propel widespread change and serve as springboards for other organizations. 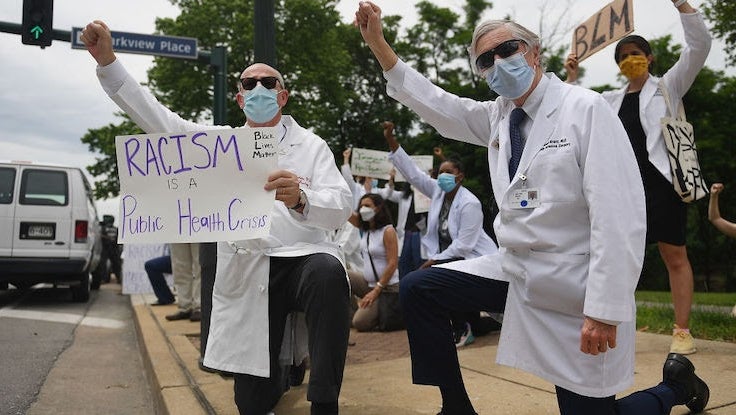 The early general consensus among the medical community and other healthcare leaders is that the announcement is a positive step. Dr. Ravi K. Perry, the chair of political science at Howard University and a member of the American Lung Association’s COVID-19 advisory panel, told USA Today, "I think it has the potential to be a game-changer," explaining how "the AMA’s announcement could be a significant catalyst in the progress of national racial dialogue and policy development to fight disparities." Speaking to Business Insider, Dr. Jessica Shepherd, a Dallas-based obstetrician and the founder of online health forum Her Viewpoint, noted that "it's important for organizations [to] take responsibility for making changes like these, rather than leaving the onus on individuals," but that she’s been pleasantly surprised with how far things have come — and how far they might go if other groups continue to do this necessary work.

Dr. Jose Torradas, a doctor of emergency medicine and creator of the bilingual toolkit COVID-19@home, took a more cautiously optimistic stance — one that does feel more appropriate this early on. "Meaningful impact happens when words become action," said Dr. Torradas. "Our asymmetric approach to public health...has taken form over decades, and change won't happen overnight." And he raises an important point. At this stage — without anything yet put into motion aside from a(n admittedly significant) declaration — it remains to be seen what actual lasting changes might stem from the AMA’s proposed policies.

But the official designation of racism as a public health threat in and of itself is a vital step. It shows formal, high-level acknowledgement of the life-threatening dangers racist belief systems pose — that leaders are aware something needs to change and are preparing to do something about it. It shows recognition from the same systemic level that’s so long been responsible for perpetuating harm, the level where change could have the most notable impacts on society. And those notable impacts are needed now more than ever.

Dr. Shepherd sums it up well: "If we don't make changes such as the one[s] we're discussing now, then we'll never really get to the heart of the problem." Things are past reaching a major turning point. And although more time is needed to tell if the declaration is what pushes progress around that corner, it’s a step in the right direction. Here’s hoping that the AMA’s new policies are the first of many successful efforts in achieving long-overdue healthcare justice.

Here’s Everything We Know About the COVID-19 Vaccines — and the Pause on Johnson & Johnson in the U.S.

Have Among Us Fatigue? Try These 7 Video Game Alternatives

Why Isn’t “The Falcon and the Winter Soldier” As Good a Match for TV As “WandaVision”?

What Is the Sex-Positive Movement and How Are Pleasure Products Contributing to It?
trending articles
1

Here’s Everything We Know About the COVID-19 Vaccines — and the Pause on Johnson & Johnson in the U.S.
2

Have Among Us Fatigue? Try These 7 Video Game Alternatives
3

Why Isn’t “The Falcon and the Winter Soldier” As Good a Match for TV As “WandaVision”?
4