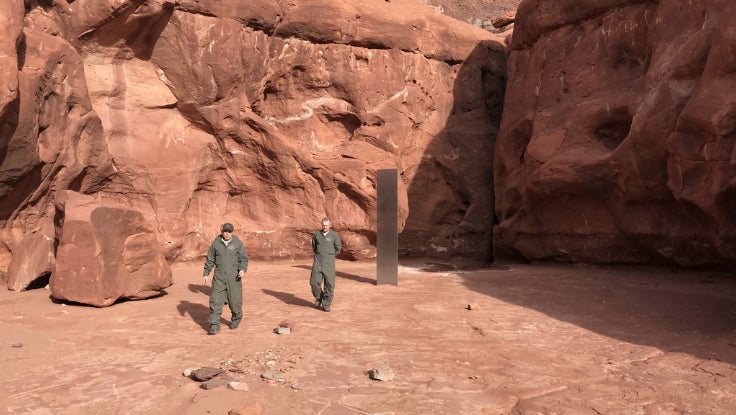 Developing Story | On November 18, 2020, wildlife biologists spotted something unusual from their helicopter while conducting a survey of bighorn sheep in the Utah desert: a mysterious silver monolith. It looks like something out of The Twilight Zone — or maybe even the Museum of Modern Art — and, according to the Bureau of Land Management, the structure was illegally put up. Meaning, there’s no official record of its installation. So, what is this 10-foot-tall, seamless silver monolith, and how did it find its way to the red rock canyons of Utah?

Since the discovery, theories surrounding the monolith’s origins swirled, ranging from memes about Stanley Kubrick’s 2001: A Space Odyssey (1968) and aliens to jokes about the monolith being part of some viral marketing campaign. The New York Times even speculated about the monolith’s roots, asserting that it looks quite similar to the works of late Minimalist sculptor John McCracken, who, apparently, loved sci-fi and even befriended Star Trek’s Leonard Nimoy. Now, it seems an anonymous art collective is taking responsibility for at least some of the monoliths that have cropped up around the globe, but the mystery isn't completely done and dusted.

"We were standing outside looking at the stars and he said something to the effect of that he would like to leave his artwork in remote places to be discovered later," the artist’s son, Patrick McCracken, told The Times. On the other hand, artist friends of McCracken’s have their doubts, citing that the object is too "crudely" hewn to be from the renowned artist’s oeuvre. Needless to say, the jury’s out on this one. 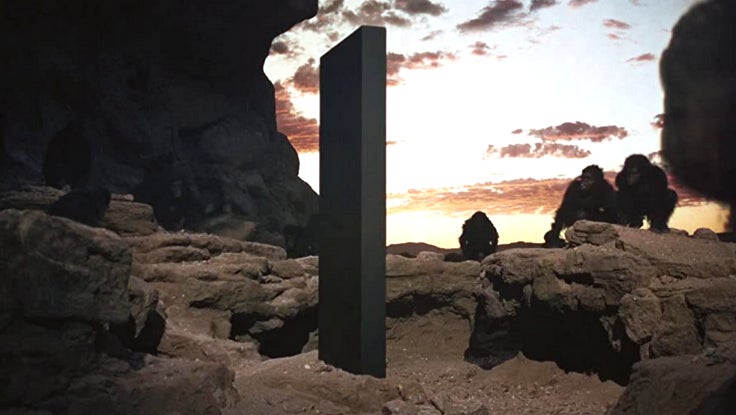 No one from McCracken’s circle or the art world has gotten close enough to inspect the alleged artwork — and it seems increasingly unlikely that someone with that knowledge will ever see it.

Authorities never officially disclosed the location of the monolith, mainly because it was located in a rather remote area near Moab, but, thanks to the power of Reddit, curious folks were able to pin down the object’s GPS coordinates. In fact, CNN reported that several inquisitive adventurers traversed the challenging terrain to catch a glimpse of the monolith.

One of the first hikers who made it out to the monolith was David Surber, who’d volunteered to confirm the accuracy of the Reddit-sourced coordinates. Surber later posted the "facts" on Instagram, saying that the monolith sounded "like a cardboard box" and it wasn’t solid or magnetic. Want to check it out for yourself? Tough luck. On November 27, 2020, the monolith vanished. The official statement from Utah’s Bureau of Land Management noted that the monolith had been removed from public lands by "an unknown party" and reiterated that they cannot remove structures that are considered private property, thus absolving them of any culpability in the mystery of the disappearing desert monolith.

The Case of the Second Mysterious Monolith

No one saw the monolith’s removal happen, which is strange, but it was way out there in the Moab. (Allegedly, someone did see the monolith’s movers, but this hasn’t been fully documented.) And while this might seem like some stunt not worth dwelling on, even more potential pieces of the puzzle have come to light, reigniting public interest in the object. 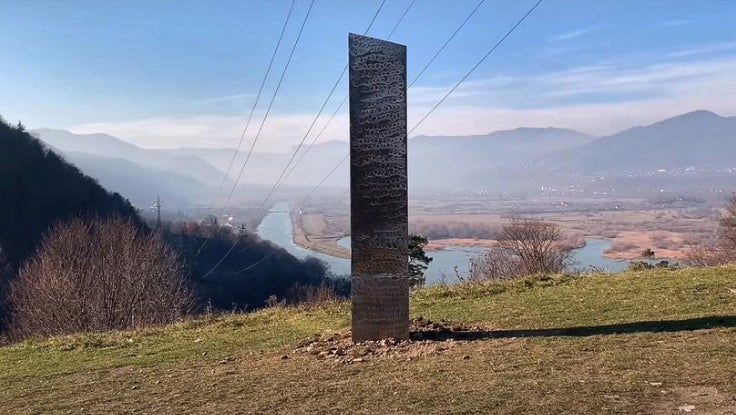 Less than two weeks after the Utah monolith first appeared, a second, very similar monolith appeared on the Batca Doamnei plateau overlooking Piatra Neam?, Romania. Although the silver coloring and height of the seemingly metallic object align with the Utah monolith, the surface differs. According to NPR, the Romanian monolith has "an eye-aching sheen and looped markings along its surface." Could it be a copycat? Potentially. An alien with a sense of humor? Some locals have quipped that that’s likely the case. Whether or not the two silver monoliths are linked, this whole story remains rather unresolved — and highly amusing.

More Monoliths Appear; An Art Collective Takes Responsibility For Some

A third silver monolith was discovered on December 2 at the top of Pine Mountain in Atascadero, California. According to the SoCal city’s local news, the “obelisk was not attached to the ground, and could be knocked over with a firm push.” While its flimsier build might indicate a copy cat, the Atascadero monolith still managed to vanish like those before it — although, this time, the circumstances weren’t as mysterious. Reportedly, social media videos show a group of people replacing the monolith with a plywood cross, something Atascadero Mayor Heather Moreno expressed disappointment about, because the “monolith was something unique and fun in an otherwise stressful time.” 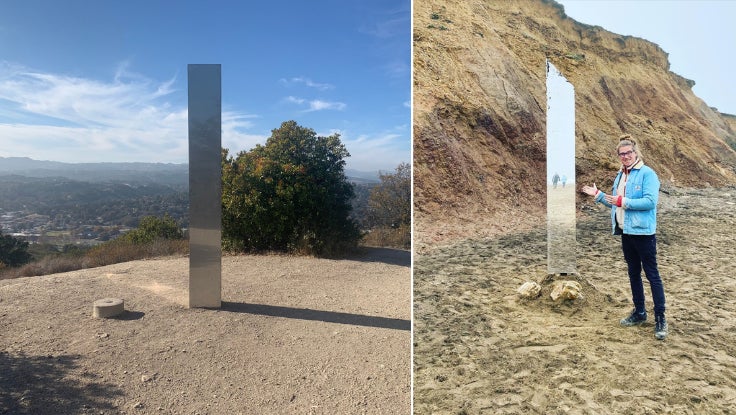 Over the first weekend of December 2020, yet another silver monolith was discovered — this time on the Isle of Wight, which is just off the southern coast of England. According to the BBC, Isle of Wight resident Alexia Fishwick stumbled upon the object while walking the beach. The isle’s National Trust is currently investigating the object, since Compton Beach is technically their protected land. Whether or not this fourth monolith will disappear remains to be seen — or, you know, not seen.

But these most recent monolith appearances did bring some information to light in this ongoing saga. An anonymous collective dubbed The Most Famous Artist has reportedly taken credit for the monoliths in Utah and Southern California — and it even sold the apparent Utah monolith for $45,000 under the title "Authentic Alien Monolith." However, when asked if the Isle of Wight version was theirs, the collective stated that, "The monolith is out of my control at this point. Godspeed to all the aliens working hard around the globe to propagate the myth.” Even with the collective's reported involvement, there’s still no full explanation, especially for the monoliths it hasn't taken credit for installing.

Throughout the rest of 2020 and into the early weeks of 2021, copycat monoliths continued to crop up all over the world. Some have been claimed by artists, who were inspired by the Utah monolith, while others are promotional items or viral hoaxes, lacking in any artistic intent. According to the website Monolith Tracker, over 170 metal columns that resemble Utah’s now-famed monolith have appeared in various locations across six of the Earth’s seven continents. (Sorry, Antarctica.) 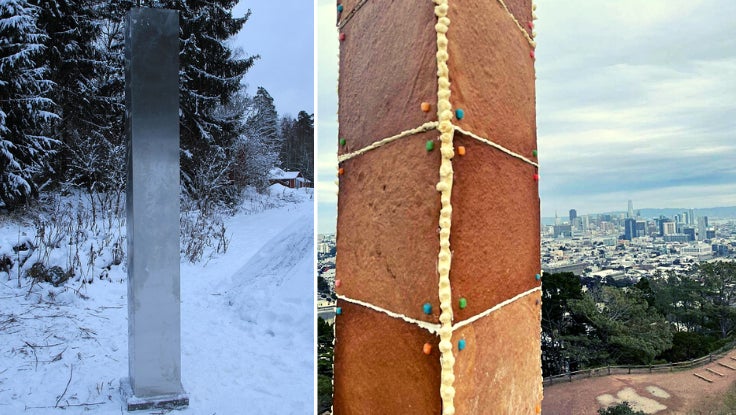 On December 29, 2020, India was visited by a monolith: standing in Symphony Forest Park in Ahmedabad, Gujarat, one of the copycat structure’s panels had numbers relating to longitude and latitude coordinates etched into it. Speaking with The Indian Express, a local anonymous artist noted that the monoliths are so beloved because of their mystery, “because people enjoy the mystery of unlocking new ideas and unlocking new thoughts.” This feels like the simplest answer — and maybe the closest we’ll get to really understanding the strange point in time when silver monoliths became all the rage.

Although the mystery (sort of) remains, it's clear that for many this interesting story has been a welcome break from the otherwise heavy 2020 news cycle. And no monolith captured the light-hearted nature of the headline-making phenomenon quite like the one that appeared in San Francisco, California’s Corona Heights Park: Made entirely out of gingerbread and frosting, the structure appeared on Christmas morning and, by the next day, it vanished. Sometimes, that’s just the way the cookie crumbles. 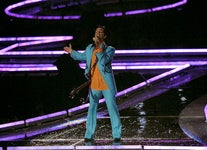 From Strange to Iconic: The Most Memorable Super Bowl Halftime Shows 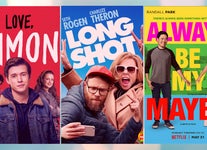 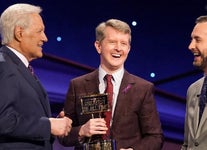 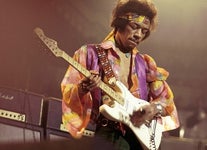 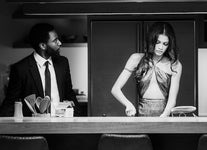 Malcolm & Marie: This Is How the Netflix Movie Was Made During the Pandemic 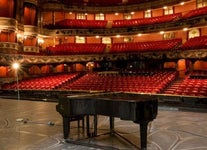 What Will Live Music Look Like in 2021?
trending articles
1

From Strange to Iconic: The Most Memorable Super Bowl Halftime Shows
2

Malcolm & Marie: This Is How the Netflix Movie Was Made During the Pandemic
澳门9159入口